Golden Harvest was established in the 1950s, but the story of apples growing on our land goes back much further.

The apple orchards of the upper Hudson Valley are some of the most productive in the world, and have a history that goes back hundreds of years. The climate and soil composition is especially good for growing apples, especially in Columbia County, where the largest apple farm in the US was located in the 1800s, according to historical sources.

A bird’s-eye view of Valatie from 1881 shows a large, full-grown apple orchard located just to the north, along the New York – Albany Road (now U.S. Route 9). This is nearly the precise location of present-day Golden Harvest, which shows that apple farms have existed in our immediate vicinity at least as early as the 1870s.

In the 1920s, the land between Route 9 and State Farm Road, currently our Home Farm and State Farm orchards, belonged to a fruit farmer named Barent Van Buren. In 1932, Barent sold a 42-acre section of this farm another Van Buren family, Harry and Edwina Van Buren, who grew apples on the land for another two decades. Three buildings on the farm survive from this era – the farmhouse, the equipment shed and the red barn.

For many years this orchard was known as the Van Buren Farm. Martin Van Buren, the 8th U.S. President, lived much of his life at his estate in Kinderhook, just a few miles away. Although there is no direct connection between the two Van Buren families, President Van Buren was also a farmer, and was particularly interested in innovative farming techniques.

Apple production in Columbia County reached its historical peak in the late 1940s, with about 1.5 million bushels harvested annually. Orchards covered the land here; an aerial map from 1948 shows apple trees growing on both sides of US Route 9 where it intersects with Route 9H, and the Van Buren Farm was at the very center.

Daniel and Madeline Zinke opened the Roadstand in 1957.

In 1953, Harry and Edwina Van Buren sold the 42-acre home farm and several smaller plots to their orchard manager Daniel Zinke, who was also managing another local farm at the time. The Zinkes and their two daughters moved into the farmhouse at the Van Buren Farm in 1955.

It soon became clear that new retail and cold storage facilities were needed, and plans were drawn up for a roadside stand. Jayne, one of the daughters, remembers how she helped plant decorative maple trees with her mother in front of the new building.

The Roadstand opened for business in 1957, with the large, block-letter sign on the roof announcing the new name – GOLDEN HARVEST FARM. With a sizeable retail space and a 6,500 bushel cold storage room, the Roadstand was the largest of the roadside markets along Route 9 in Columbia County. Every fall, at harvest time, this stretch of road turned into a tourist attraction – customers would arrive by the carload, taking in the colorful outdoor apple displays and choosing from a wide selection of produce. (Our Roadstand is the only one that survives to this day.)

In the 1960s, the Zinkes expanded the Roadstand, adding a second, larger cold storage and a cider mill. They planted an entire orchard of dwarf-sized apple trees, a new concept at the time, and installed a trickle irrigation system to increase the yield while using the most efficient, water-conserving method available. 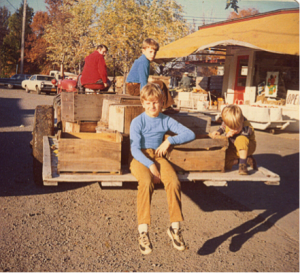 In 1975, Jayne Zinke and husband Alan Grout moved to the farm with their four young sons. It was the beginning of a new era of expansion at Golden Harvest. With the acquisition of the 58-acre State Farm orchard in 1978, and the Martino (Maple Lane) and Whitney orchards two years later, the land area of the farm grew to approximately 220 acres. During this period, the farm was re-registered as Golden Harvest Farms, Inc.

Before long, the third generation began helping out on the farm. The three older Grout boys – Danny, David and Douglas – would frequently work on the cider bottling line after school. Douglas and his two younger siblings, Derek and Darren would go on to have management responsibilities at Golden Harvest

The increased yield from the new apple orchards meant that more cold storage was soon needed, so in 1982 Alan decided to build a new 120×120’ cold storage facility with state-of-the-art controlled-atmosphere (CA) rooms. (CA rooms have reduced levels of oxygen, and can keep apples fresh for up to a year.)

The New Building was built just behind the Roadstand, with four CA rooms and a total capacity of over 40,000 bushel. An additional 140×120’ extension was added in 1994 to house more cold storage rooms as well as a large packing line.

In 1988, Douglas Grout started the bakery at Golden Harvest, with one donut machine and one mixer. Now we have a full-size bakery with five donut machines and five convection ovens. Douglas is currently in charge of wholesale domestic and international sales, exporting apples and other produce to countries in Central America.

In 2007, Derek Grout created Harvest Spirits, our farm distillery, using our own apple cider to make vodka and old-style applejack. Derek’s creations have won numerous prizes. You can visit Harvest Spirits for tastings and tours – the distillery is located in the New Building just behind the Roadstand.

We currently grow nearly 30 varieties, including the ever-popular Honeycrisp and several new varieties developed at the New York apple institute.